Sequim is located on the north coast of Washington State in the Olympic Peninsula, just minutes from the Victorian seaports of Port Townsend and Port Angeles.  Located adjacent to Olympic National Forest, Sequim is conveniently situated to be your vacation destination. Only 65 miles via ferry from Seattle. 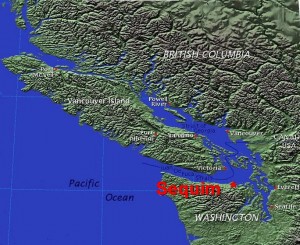 What makes Sequim (pronounced “Skwim”) so unique and worth a visit?

The weather is one major reason! The sun shines here more than anywhere else in western Washington. The “rain shadow”, caused by the Olympic Mountains, protects the valley from the rain that falls east and west of Sequim. The sunsets are simply breathtaking!

The reason for this is a unique phenomenon which places this area in the “rain shadow” of the Olympic Mountains. While areas a mere 15 minutes in either direction get anywhere from 30 to 150 inches per year, the rainfall in Sequim averages between only 13 and 17 inches annually. That’s one of the reasons why lavender grows so well here.

Sequim has been dubbed “the blue hole” by airplane pilots. When they fly over this area, there is a patch of blue at Sequim in contrast to the clouds all around it. The sun shines more in Sequim than anywhere else in western Washington and usually comes out, at least for a short while, sometime during each day.

If you like hiking, boating, fishing and crabbing, bird watching and golfing, Sequim is a great vacation spot!